Fear is considered an unpleasant, strong emotion caused by the expectation and awareness of danger. Like anger, we have many words to describe it: anxiety, terror, panic, fright, dread, and trepidation.

There are times in which fear may act in our favor, such as in the “flight versus fight” response of our adrenal glands. It can warn us of physical danger and get us out of the way of harm. No body has said that cautionary behavior is not valid.

However, most fear I have discovered is largely unfounded. Most fears don’t seem to come true unless you, by your continued preoccupation, manifest occurrences in your life; in a sense, “playing them out”. Continually fearing that disaster is just waiting behind the corner to strike you may well come true as you expect it to.

False evidence appearing real is an accurate depiction of the illusion of fear. As tangibly real as it often seems to us, it is ultimately illusory.

Much of my own life I have wrestled with conquering my fears, whether they be of survival, disaster, security issues, the unknown future, relationship- or money-oriented. In the past, I have seen the demon as something to be vanquished. In doing so, I may temporarily win, but the monster always comes back.

Then I learned the act of non-resistance.

A technique that has worked well for me has the incoming breath acknowledging the fear (whatever it is) and the exhaling breath, releasing the fear. I learned to stay with the breathing, even if it took an hour or more, until the feelings of fear had dissipated. By acknowledging it, I didn’t say it really existed, just that I recognized its illusory presence within me. This act on non-resistance does not feed the fear, increasing its potency, but begins to dissipate it.

There are different levels of fear, for I do not feel that it is a strictly 3rd dimensional reaction. I believe that it can deposit in all of our bodies, and in other aspects of our multiple selves living on other energy frequencies.

Believe it or not, a primary definition of fear in the dictionary is “having a reverent awe of God”! Talk about how we have let fear rule us! We have even taught ourselves to be afraid of God. This fearing of God is the ultimate illusion. 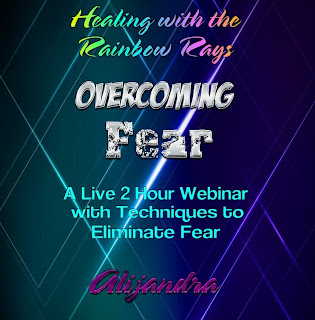 For much more about how to deal with fear when it comes up, see the Overcoming Fear Live Webinar on mp3 available to order. See Store page.

"Alijandra's "Overcoming Fear" workshop should be a pre-requisite to becoming a human. I learned several multidimensional techniques which I can use at any time to disempower and release my fears. (Who knew I had so many?) When the workshop ended, I felt as though a great burden had been lifted. In fact, I was so ecstatic that I opened my office door and shouted, "I'm not afraid of anything!" (I trust the Universe heard me.) "Overcoming Fear" far exceeded my expectations--thank you, Allie! ~ Eleyne-Mari; Newport , RI

Email ThisBlogThis!Share to TwitterShare to FacebookShare to Pinterest
Newer Post Older Post Home
I have known Alijandra for several years and can testify that she is continually updating us with new channelings and information about these remarkable rays and how to utilize them for our greatest and highest good – as well as that of the planet. Her grasp of how the rays and energy works in this dimension, as well as others is phenomenal. ~ Teri Van Horn, crystal author, healer and teacher, Texas

Send an email to alijandra7777@
yahoo.com to be added. Thank you!

Alijandra
Discover that fantastic point where science and magic meet! My intent is to inspire, uplift, illuminate, transform ourselves--and hopefully transform others by our living example.

"There are a number of teachers who provide good information about color healing, but In my experience, no one comes close to Alijandra in the depth and breadth of her knowledge. Studying with her has opened up for me a vast range of possibilities in healing, my own and in my work with others. Her webinars awaken and recharge me, and connect me with my deepest faculties.
"As a teacher, Alijandra is a guiding light, who allows each of her students to grow and develop according to the best of his/her abilities. She is open to requests in exploring any aspect of color healing even in the webinar format. You cannot stump her -- her range of knowledge and experience is so vast. You want to know? Sure, she'll do it! Because she makes us feel so at ease, we flourish in leaps and bounds! Studying with Allie is a privilege I will always be grateful for." ~ Rohana Wolf; Chicago, IL

"Your tremendous knowledge, patience, intuitive understanding and teaching experience made for a great class with lots of techniques which were easy to understand and do. We had a lot of practice which was really good as it allowed us to integrate better the information that we received. I look forward to practicing what I learned. Way to go – thanks a mil for coming so far!" (Greer Palloo ~ Toronto, Canada)


LIGHT AND COLOR
A Profound Method of Healing
with Alijandra

Color energy healing involves basic skills of energy transferral for balancing body, emotions, mind and soul alignment, as well as quantum capabilities of connecting multidimensionally, beyond space and time, beyond gravity, beyond matter as we know it.

"The sessions have greatly accelerated the process of manifesting, including the youthening process. I am having an increasing amount of 5th dimensional experiences with my god-self. Phenomenal energies!" (George T. ~ California, USA)

“Alijandra is a true color pioneer. She wrote the first book I ever read on color--“Healing with the Rainbow Rays”--and even though I've read many books since, I remain convinced that no one understands the power of color like Alijandra! Her book should be required reading in all color therapy practitioner curriculum.” (Eleyne-Mari, certified color therapist ~ Rhode Island, USA)

"Wonderful class! I feel this will help expand my healing work as well as accelerate my spiritual growth and healing. Color energy therapy is a very gentle, soft loving energy, but it is also a very powerful strong energy. A neat balance. " ~ Michelle W., Los Angeles